The mystery of Poverty Point World Heritage Site dates back more than 3,400 years. Learn more below about the people, mounds and artifacts left behind representing an exceptional hunter-gatherer tradition.

The People
The Mounds
The Artifacts 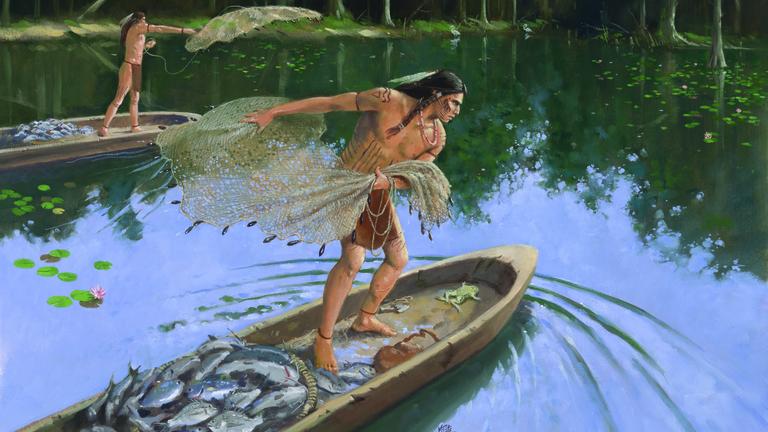 Most of the animal remains found on-site were from locally caught fish in this hunter-gatherer community. © Martin Pate 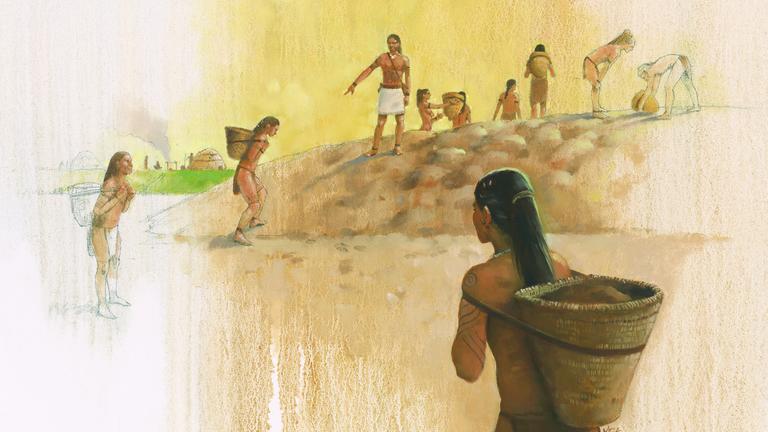 People moved soil by hand, basketload by basketload, without the assistance of domesticated animals or wheeled carts.

Those who lived at Poverty Point more than 3,000 years ago left no written records of their day-to-day lives. We know that the site was a ceremonial center that was once home to hundreds or perhaps thousands of people, as well as a trading hub unmatched by any in North America at that time.

Archaeologists have learned about these people by the materials they left behind—artifacts and archaeological features—as well as what they didn’t leave behind, such as burials and crop remains.

Burial mounds were common throughout the southeastern and central U.S., yet the absence of human remains at Poverty Point suggests these monumental earthworks, built by hand, were being used for other purposes.

Just as curious is the lack of domesticated plant remains found at Poverty Point. Archaeologists have found evidence of nuts, persimmons and grapes, which—along with fish, deer and other wild foods—were more than sufficient for survival. This makes sense, as the Lower Mississippi Valley is one of North America’s most fertile regions, abundant with food that was literally ripe for the picking. Foraging was a fundamental part of Poverty Point society.

So was commerce. The site was once at the center of a huge trade network. Seventy-eight tons of rocks and minerals from up to 800 miles away were brought to Poverty Point, an area built on an elevated landform, Macon Ridge, that contained no stone of its own. Its people needed this raw material to craft into weapons, tools and ceremonial items. This would have been impossible without help from faraway travelers, or locals traveling by boat to collect rocks themselves.

We know much about Poverty Point society just by where they built their homes. Looking over Bayou Macon, it’s easy to assume that these men and women relied on the river. Thanks to animal and plant remains, we know their diet consisted largely of fish, alligators, frogs, turtles, deer, hickory nuts, aquatic tubers, fruits and other wild foods. Most of the animal bones found on-site were from locally caught fish.

The question of why Poverty Point was abandoned remains unanswered. A subsequent American Indian group came along around 700 A.D. and reused a small part of the site, but otherwise, it remained abandoned until its rediscovery in the 1800s. 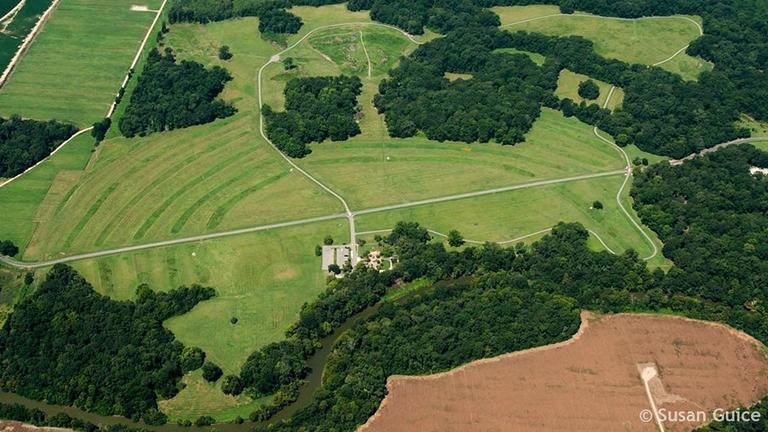 Nothing else like Poverty Point’s six C-shaped earthen ridges existed in the ancient world. 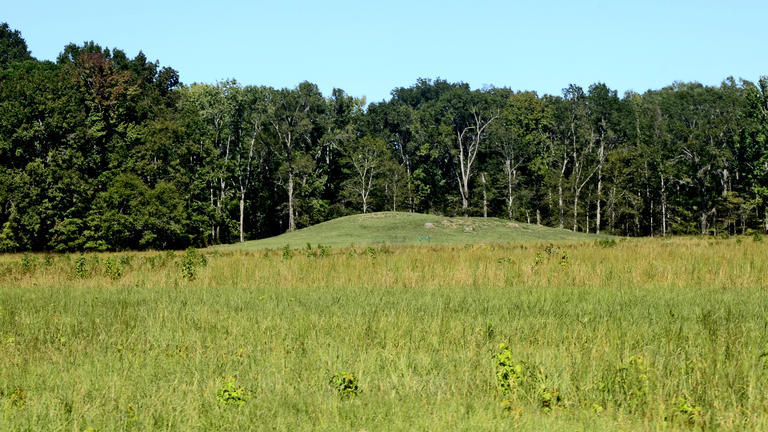 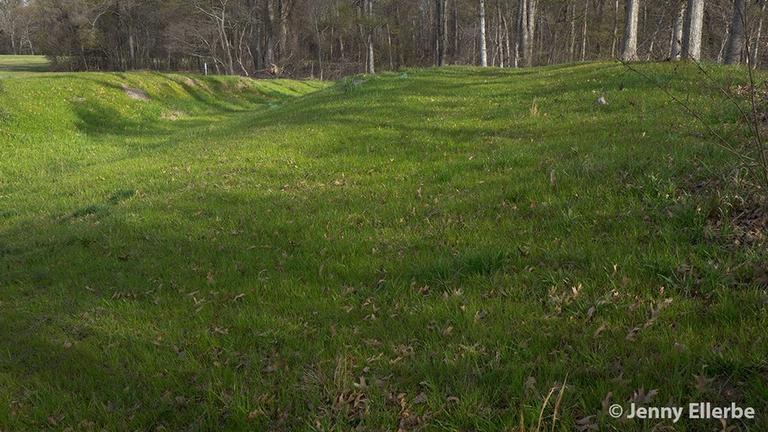 Mound C is the only mound built in the plaza during Poverty Point times. 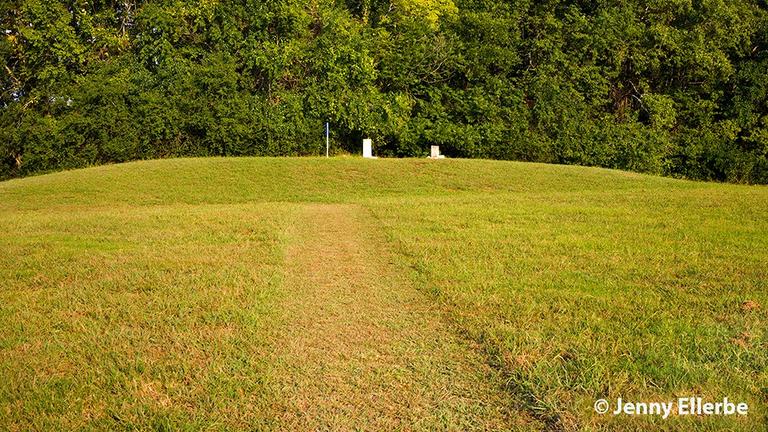 Mound D was built by a group of American Indians 2,000 years after the people of Poverty Point. 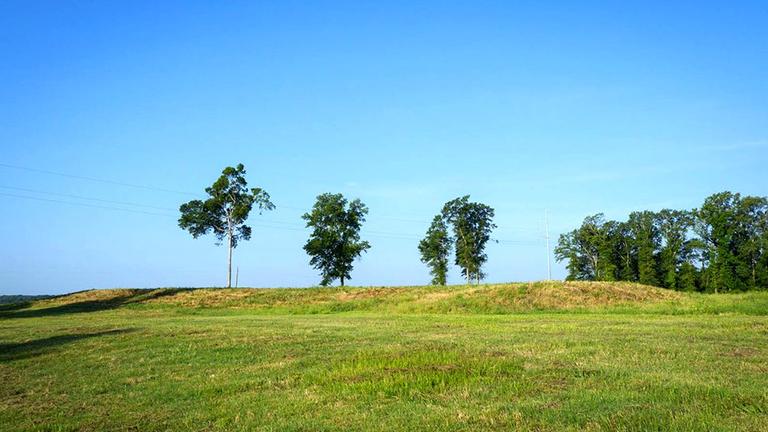 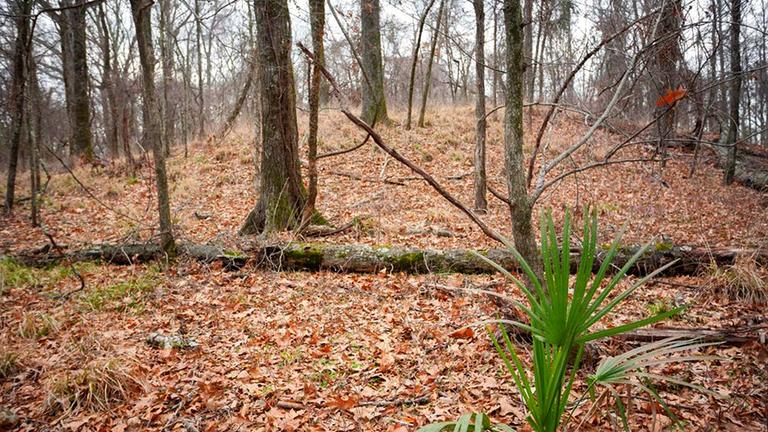 Mound F was only recently discovered and is the last Poverty Point-aged mound built by American Indians on the site. 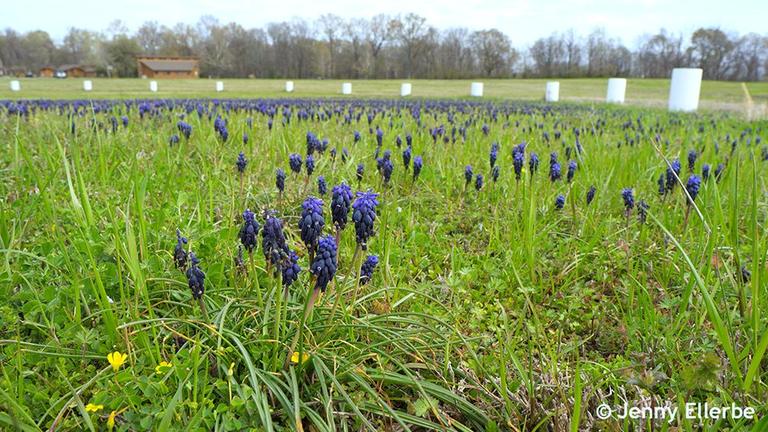 White cylinders give visitors an idea of how large the post circles in the plaza were.

Poverty Point’s centerpiece is its collection of earthworks built during a 600-year period, or what today would be considered 25 generations. Its concentric half-circles, measuring 4 to 6 feet high in places, have an outside diameter of three-quarters of a mile apart. Mound A, commonly known as the Bird Mound, is one of the largest in North America. Everything about the earthen structures at Poverty Point suggest a concerted effort to build a massive residential and ceremonial center that had no rival in terms of scale and size.

There are a few uses for mounds. Some are used for burials. Some are used as platforms to elevate special buildings or temples. Others, such as shell mounds in Florida, are ancient trash heaps. Yet Poverty Point stands apart. With no human remains or heaps of shells, archaeologists assume that these were symbols of power and wealth.

People lived on the earthen ridges. Excavations have revealed postmolds, distinctive stains in the soil caused by now-decomposed wooden posts, which are probably the remains of houses. At Poverty Point, dwellings were wattle and taub constructions, meaning the walls were formed by a woven framework of cane and sticks that was covered in mud.

The scale of construction here makes Poverty Point stand apart for another reason. During this era of human history known as the Late Archaic, most people lived in small groups. Due to the size of the earthen ridges—the habitation area at Poverty Point—however, there may have been at least hundreds of residents.

And here’s a mystery for you. In the 43-acre plaza, defined by the earthen C-shaped ridges, are the remains of massive postholes that were set in circles standing up to 213 feet in diameter. An American version of Stonehenge? Perhaps, but probably not. The plaza would have made for an ideal meeting place. Some have speculated that it was used for astronomical observation. 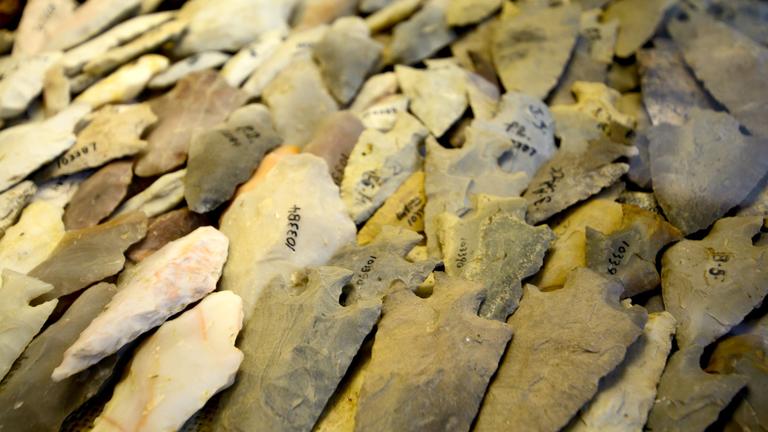 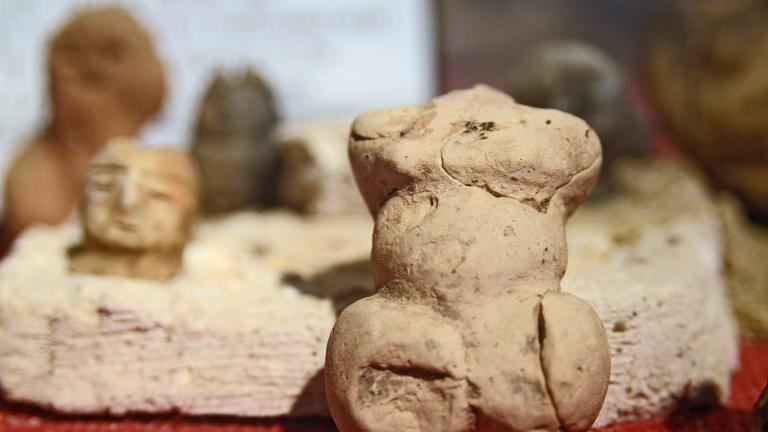 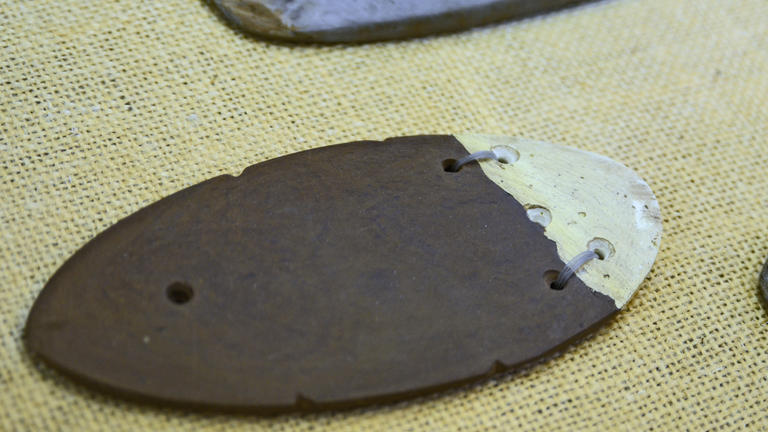 Archaeologists have found many flat stone artifacts believed to be atlatl weights. 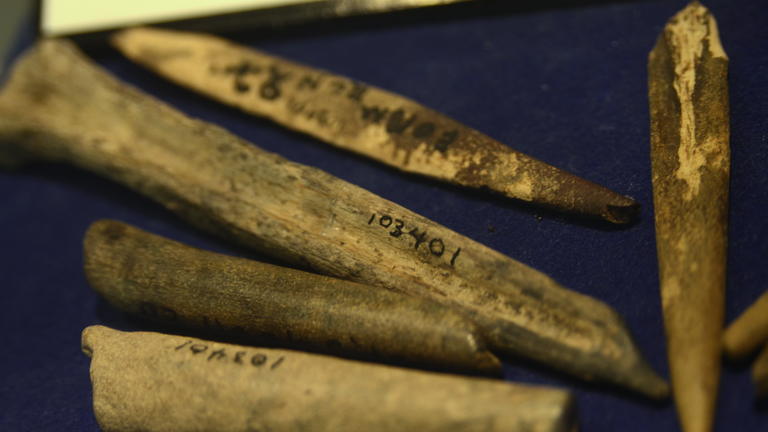 Polished bone awls and needles are among the tools found at Poverty Point. 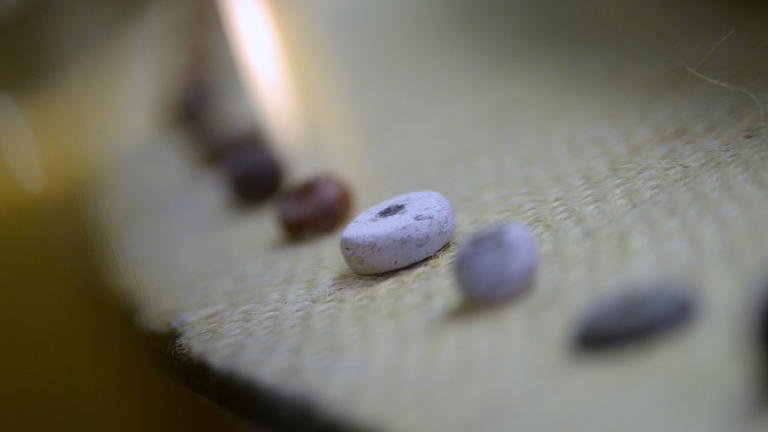 Many different kinds of beads and pendants have been found at Poverty Point.

Much of what we know about Poverty Point comes from its diverse artifact collection. Unfortunately, objects made of wood or other organic materials such as canoes or fishnets—which could have told us about what these people traded and used daily—decomposed long ago.

Thankfully, though, there are plenty of stone and clay artifacts that help tell the story. Think of Poverty Point decorations and styles as a fingerprint. The intricate owl designs carved from red jasper stone and the ceramic human figurines are particular to this place. This tells us that art was important to these ancient people, and the images may have held spiritual significance.

Likewise, think of the stone found at Poverty Point as a roadmap. Rocks and minerals came to the site from as far away as present-day Iowa and as far east as the Appalachians. Water tied these routes together. Like our modern highway system, boat travel along the Mississippi River and its tributaries facilitated the movement of people and materials.

Pottery is not abundant at Poverty Point, but its people were among the first in the Lower Mississippi Valley to make earthen vessels. They also made many other objects of fired earth or clay, such as Poverty Point Objects and figurines. When visiting the site, you will see numerous examples of fired clay used thousands of years ago.

However, stone was more popular than clay for making vessels. And not just any stone. Soapstone from Georgia and Alabama quarries was frequently used, and some pieces were decorated with bird and panther designs. The soapstone bowls were highly valued, and at Poverty Point, you can find examples of broken stone bowls that were repaired or reused—and others that were turned into pendants and beads. Sandstone was also used to form vessels.

Before leaving the museum, be sure to read about and see examples of what are known simply as Poverty Point Objects, the most numerous of all artifacts found at the site. These are small, hand-formed clay balls that were used to cook food. The PPOs were placed in a hole, and a fire was built to heat them. When the fire died down, raw meat or fish was added, and the hole was covered with dirt, cooking the meat. Other native cultures used rocks for the same purpose, but at Poverty Point—where stones were costly to obtain—prehistoric chefs found an ingenious workaround.